Ankylosing spondylitis (AS) is a type of arthritis that primarily affects the spine.

The disease is characterized by inflammation and resulting stiffness and pain in the joints along the spine. The knee and shoulder joints may also be affected.
With ankylosing spondylitis (pronounced ankle-low-zing spond-ill-eye-tis), the inflammation in the joints of the spine will typically result in parts of the vertebrae and joints in the spine fusing together. As parts of the vertebrae grow (or “fuse”) together, the spine becomes more rigid and inflexible.
The fusion takes place as a reaction to inflammation of ligaments or tendons at the site of attachment to bone. The inflammation causes bone to erode at the site of the attachment, and then as the inflammation subsides, the body’s natural healing process causes new bone growths in its place.

Because this new bone is stiff, as opposed to the elastic quality of the tissue or ligaments, the normal range of motion of the spine is diminished.

Ankylosing spondylitis is a form of arthritis that leads to pain and stiffness primarily in the joints of the spine, as well as affecting the ligaments and tendons.

The points at which the ligaments or tendons attach to the bone is called the enthesis. Inflammation of the enthesis, known as enthesitis, is the foundation of the disease process of ankylosing spondylitis.

It is this ongoing process of healing and repair following inflammation of the enthesis that eventually can lead to scarring of the tissues and extra bone formation.

Often the first symptom of ankylosing spondylitis is sacroiliitis, or inflammation of the sacroiliac joints at the base of the spine.

This inflammation can cause buttock pain that radiates into the thigh and/or diffuse lower back pain. The sacroiliac joints can eventually fuse together, limiting mobility.

The same process of inflammation and calcification can spread up the spine.

It often occurs in the facet joints, which are small paired joints at the back of the spine.

It can also occur at the costotransverse and costovertebral joints, where the ribs connect to the spine in the upper back.

The annulus fibrosus, the series of ligaments encasing the intervertebral discs, can also become calcified, causing spinal segments to fuse together partially or completely.

As this process spreads, the spine can become a single, inflexible unit.

The spine is meant to move, and with less mobility the spine is subject to stress fractures, especially at the junctions where new bone has formed, as this bone tends to be weaker.

These stress fractures can lead to acute pain around the point of fracture.

In the thoracic region, the disease can lead to microfractures in the front of the vertebral body, leading to a shortening of the front of the spinal column and resulting in a hunched forward posture, called excessive kyphosis. In rare cases, this posture may crowd and impair major organs, such as the heart and lungs.

Ankylosing spondylitis may affect other areas of the body as well, such as the eye or the joints of the knee, foot, hip, or shoulder. 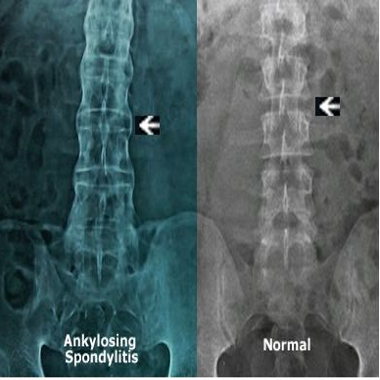