Chronic pain is pain (an unpleasant sense of discomfort) that persists or progresses over a long period of time. In contrast to acute pain that arises suddenly in response to a specific injury and is usually treatable.

A Brief History of Pain

Ancient civilizations recorded on stone tablets accounts of pain and the treatments used: pressure, heat, water, and sun. Early humans related pain to evil, magic, and demons. Relief of pain was the responsibility of sorcerers, shamans, priests, and priestesses, who used herbs, rites, and ceremonies as their treatments.

The Greeks and Romans were the first to advance a theory of sensation, the idea that the brain and nervous system have a role in producing the perception of pain. But it was not until the Middle Ages and well into the Renaissance-the 1400s and 1500s-that evidence began to accumulate in support of these theories. Leonardo da Vinci and his contemporaries came to believe that the brain was the central organ responsible for sensation. Da Vinci also developed the idea that the spinal cord transmits sensations to the brain.

In the 17th and 18th centuries, the study of the body-and the senses-continued to be a source of wonder for the world’s philosophers. In 1664, the French philosopher Rene Descartes described what to this day is still called a “pain pathway.” Descartes illustrated how particles of fire, in contact with the foot, travel to the brain and he compared pain sensation to the ringing of a bell.

In the 19th century, pain came to dwell under a new domain-science-paving the way for advances in pain therapy. Physician-scientists discovered that opium, morphine, codeine, and cocaine could be used to treat pain. These drugs led to the development of aspirin, to this day the most commonly used pain reliever. Before long, anesthesia-both general and regional-was refined and applied during surgery.

“It has no future but itself,” wrote the 19th century American poet Emily Dickinson, speaking about pain. As the 21st century unfolds, however, advances in pain research are creating a less grim future than that portrayed in Dickinson’s verse, a future that includes a better understanding of pain, along with greatly improved treatments to keep it in check.

The Two Faces of Pain: Acute and Chronic

What is pain? The International Association for the Study of Pain defines it as: An unpleasant sensory and emotional experience associated with actual or potential tissue damage or described in terms of such damage.

It is useful to distinguish between two basic types of pain, acute and chronic, and they differ greatly.

The A to Z of pain

Hundreds of pain syndromes or disorders make up the spectrum of pain. There are the most benign, fleeting sensations of pain, such as a pin prick. There is the pain of childbirth, the pain of a heart attack, and the pain that sometimes follows amputation of a limb. There is also pain accompanying cancer and the pain that follows severe trauma, such as that associated with head and spinal cord injuries. A sampling of common pain syndromes follows, listed alphabetically.

Arachnoiditis is a condition in which one of the three membranes covering the brain and spinal cord, called the arachnoid membrane, becomes inflamed. A number of causes, including infection or trauma, can result in inflammation of this membrane. Arachnoiditis can produce disabling, progressive, and even permanent pain.

Arthritis. Millions of Americans suffer from arthritic conditions such as osteoarthritis, rheumatoid arthritis, ankylosing spondylitis, and gout. These disorders are characterized by joint pain in the extremities. Many other inflammatory diseases affect the body’s soft tissues, including tendonitis and bursitis.

Back pain has become the high price paid by our modern lifestyle and is a startlingly common cause of disability for many Americans, including both active and inactive people. Back pain that spreads to the leg is called sciatica and is a very common condition (see below). Another common type of back pain is associated with the discs of the spine, the soft, spongy padding between the vertebrae (bones) that form the spine. Discs protect the spine by absorbing shock, but they tend to degenerate over time and may sometimes rupture. Spondylolisthesis is a back condition that occurs when one vertebra extends over another, causing pressure on nerves and therefore pain. Also, damage to nerve roots (see Spine Basics in the Appendix) is a serious condition, called radiculopathy, that can be extremely painful. Treatment for a damaged disc includes drugs such as painkillers, muscle relaxants, and steroids; exercise or rest, depending on the patient’s condition; adequate support, such as a brace or better mattress and physical therapy. In some cases, surgery may be required to remove the damaged portion of the disc and return it to its previous condition, especially when it is pressing a nerve root. Surgical procedures include discectomy, laminectomy, or spinal fusion (see section on surgery in How is Pain Treated? for more information on these treatments).

Picture of herniated disc between L4 and L5

Cross-section picture of herniated disc between L4 and L5

Burn pain can be profound and poses an extreme challenge to the medical community. First-degree burns are the least severe; with third-degree burns, the skin is lost. Depending on the injury, pain accompanying burns can be excruciating, and even after the wound has healed patients may have chronic pain at the burn site.

Cancer pain can accompany the growth of a tumor, the treatment of cancer, or chronic problems related to cancer’s permanent effects on the body. Fortunately, most cancer pain can be treated to help minimize discomfort and stress to the patient.

Headaches affect millions of Americans. The three most common types of chronic headache are migraines, cluster headaches, and tension headaches. Each comes with its own telltale brand of pain.

How is pain diagnosed?

There is no way to tell how much pain a person has. No test can measure the intensity of pain, no imaging device can show pain, and no instrument can locate pain precisely. Sometimes, as in the case of headaches, physicians find that the best aid to diagnosis is the patient’s own description of the type, duration, and location of pain. Defining pain as sharp or dull, constant or intermittent, burning or aching may give the best clues to the cause of pain. These descriptions are part of what is called the pain history, taken by the physician during the preliminary examination of a patient with pain.

Physicians, however, do have a number of technologies they use to find the cause of pain. Primarily these include: 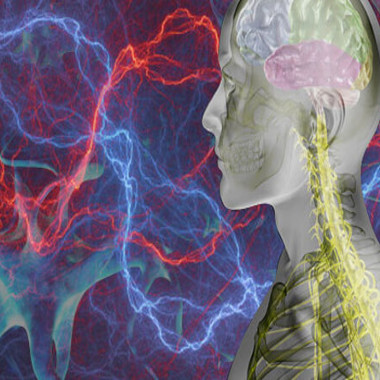