It constitutes the most comprehensive and advanced robotic rehabilitation department in Greece.

The LOKOMAT Robotic system is a gait therapy device with robotic gait orthosis that comprises of a support system at the hips and two robotic lower extremities that are individually adapted to each lower extremity. It works in conjunction with a special treadmill and a body weight support system. The LOKOMAT system is digitally controlled via a computer.

Treatment with the LOKOMAT system is based on long-term research conducted by university clinics with the help of IT specialists, engineers and electrophysiologists and is currently the most modern rehabilitation therapy. With the support of the LOKOMAT, patients learn to walk again by using two therapeutic methods (repetition and targeted training). This targeted form of treatment has been established to rehabilitate a wide range of neuromuscular disorders and spinal cord injuries. Thus, the patient walks with a normal gait right away, thus minimizing the rehabilitation time.

Patients suffering from the following conditions can take advantage of treatment with the LOKOMAT:

The ERIGO device is a robotic platform that fully controls the mechanism of leg motion using special computers. It supports and facilitates the mobilization of bedridden patients, by contributing to the prevention of secondary complications, which are caused by a prolonged period of immobility (e.g. thrombophlebitis, orthostatic hypotension, lower extremities stiffness, etc.). ERIGO allows patients to come into a vertical position (90 degrees), while the lower extremities move in a normal cyclic movement operated with electronically regulated resistance via a touchscreen. Contrary to Erigo, exercise using a conventional non-robotic tilt table is a standard treatment that does not protect the patient from secondary complications in the early mobilization phase of neurological patients (sensorimotor injury).

Patients suffering from the following conditions can take advantage of treatment with ERIGO for their early mobilization: 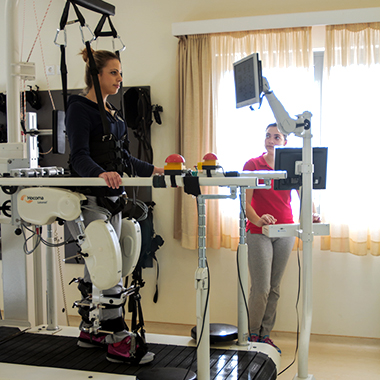