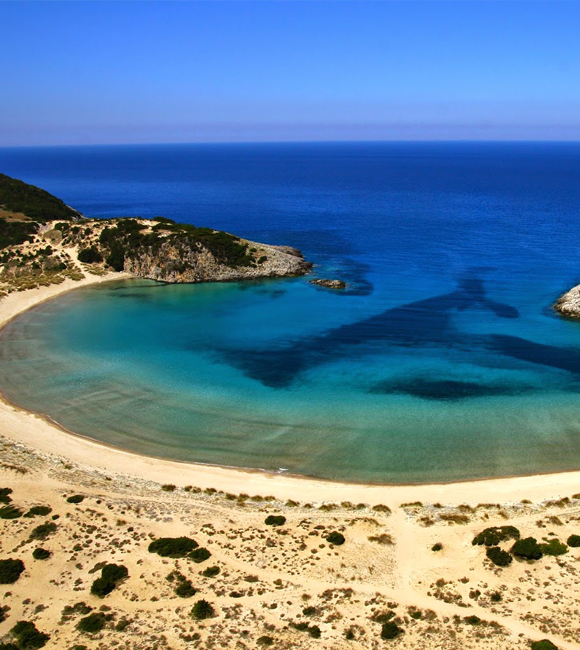 Discover the wonderful beaches and islands of the Messinian Gulf

The wonderful beaches with sand, pebbles or rocky shores stretch some 140 kilometers along both the Ionian and the Messinian Gulf. Elea, Kalo Nero, Kyparissia, Agrili, Aghia Kyriaki, Lagouvardos, Marathoupoli, Chrysi Ammos (Golden Sand), the beautiful beach of Voidokilia, and Romanos beach “bathe” in the clear blue waters of the Ionian Sea. At this point the Navarino Bay is home to beautiful Pylos with its bright island colors. Descending from here we reach the western foot of Messinia. Picturesque Methoni, with Finikounda to the east, is located at one end. While Koroni, which is reminiscent of a medieval town, can be found on the other. Continuing along the western coast of the Messinian Gulf we come across Aghios Andreas, Petalidi and Buka (Messini), until we reach Kalamata. The capital of Messinia, which is situated in the cove of the Messinian Gulf, with its neoclassical houses and the endless sandy coast. To east is Mani with its towers, wildlife and beautiful beaches: Avia, Almyro, Akrogiali, Santava. Kardamyli, Stoupa and Aghios Nikolaos are further inland.
You will also find Messinia’s islands (Proti, Sfaktiria, Sapientza, Schiza, Aghia Mariani and Venetiko) which are surrounded by crystal clear waters, colorful ocean beds, jagged cliffs and lighthouses. Islands with enchanting paradises, wetlands and relics from past civilizations.
However, Messinia does not only have clear blue waters, beautiful beaches and picturesque seaside villages. It has forests on slopes and mountain peaks as well as villages nestled in the mountain slopes. First and foremost, it has a rich history with remarkable archaeological sites and significant monuments. Byzantine churches and castles.
Ancient Messene, one of the most important archaeological sites in Greece, which was at its peak in the 4th century B.C. is located just 20 km from Messinian capital and the Palace of Nestor – the best preserved Mycenaean palace – in Englianos, close to Chora.

Opposite the Messinian beaches and at a short distance from these lie seven islands with lush vegetation, sheltered coves and constantly alternating scenery. Being uninhabited for years now, with only occasional human presence, they have a uniqueness. They maintain an exotic beauty, luring those who yearn for the exploration experience on these earthly paradises.

Proti: Proti is located in the embraces of the Ionian Sea, opposite Marathoupoli. The island’s sheltered bays were once a refuge for sailors. On this island are the remains of a wall of a Mycenaean acropolis. The monastery of the Assumption of Gorgopigi.

Sfaktiria: Sfaktiria is an oblong-shaped rocky islet that almost touches the coast and blocks the entrance of the Navarino Bay, which makes this a large safe harbor. The Sfaktiria shores are steep. Sharp vertical cliffs that rise to 106 meters above sea level. This small island, which has the remains of an ancient wall, has been associated with major historical events from 425 B.C. during the battle between the Athenians and Spartans. There one will find the monuments of Russians who fell during the battle of Navarino and of the Italian philhellene Santarosa and the cenotaph of Anagnostara, Tsamados and Sahinis, who were killed in the battle against Ibrahim in 1825. On the island is also the tomb of Prince Paul Bonaparte, Napoleon’s nephew, who died on the frigate “Hellas” in 1827.

Sapientza: Opposite the coast of Methoni are the Messinian Oinousses. This is an island cluster comprising of islands Sapientza, Aghia Mariani and Schiza. This cluster is named after the Aeneas, the first winegrower of ancient Greece, who was the first settler. Sapientza island is famous for its strawberry tree forest, with trees that exceed 12 meters in height and are more than 10,000 years old. A forest that is unique in its kind in the Mediterranean, which was declared a protected natural monument in 1986.

Bomba: On the brink of the Porto Logo Bay – home to many ancient shipwrecks – is the rocky islet of Bomba. Legend has it that Paul the Apostle landed here when he fell into a storm during his trip to Rome. To the south of the islet are the rocky islets Two Brothers. Southwest of these rocky islets, at a distance of 6 miles, is the Well: An underwater gorge that has a depth of 5,921 meters, the largest in the Mediterranean. For the purposes of the ‘Nestor’ Project, a huge submarine telescope in the area. This project relates to pioneering research by Greek and foreign research centers for neutrinos and the universe’s past.

Schiza: The largest island of the Oinousses cluster that extends across an area of ​​12 square kilometers. It was formerly named Cabrera or Carvera. It has a rocky coastline with deep waters, thus its beaches are not suitable for swimming. Vigla, which is the highest peak of the island, is home to an amazing cave with stalactites. The island is a prohibited area because it is used as the Air Force’s firing range: the east coast has permanent targets.

Aghia Mariani: Aghia Mariani is a small island with dense bushy vegetation and is situated between the other two islands of the Oinousses cluster. With the exception of a small sandy beach, it has a rocky coastline. Located on the island is the small chapel of Aghia Marina, which is celebrated on July 17.

Venetiko: Located at the southernmost tip of Messinia – opposite cape Akritas – is the island Venetiko. Formerly known as Thiganousa, this is a desert island that expands across ​​1.2 hectares. It has a steep coastline with rugged cliffs. On the northeastern side of the island is a small beach.

Meropi: A short distance from Kardamyli is the island Merope that expands across an area of ​​only 3.0 hectares. This island, which is located 300 meters from the shores of Kardamyli, is home to the chapel of Aghios Yannis, and ruins from Venetians walls.